Another exciting week in #onesongaweek land…

On Monday some good news arrived regarding the song I mentioned in last weeks blog.  The ‘third parent’ I I’ve been talking about for a while is actually a nice chap called Ed Sheeran… 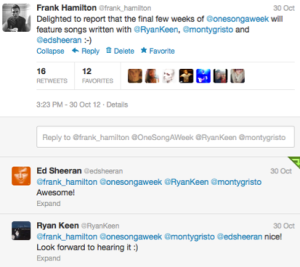 There have also been exciting developments surrounding the #onesongaweek live show (more special guests and a fantastic support act) as well as some other bits and bobs which you’ll hear about very soon.

Aside from various bits of news, various phone calls and various emails this week has been like absolutely no other in #onesongaweek history.  I spent most of it with Mark Grist…

For those of you who haven’t seen the famous Youtube video Mark is a Teacher and former Poet Laureate whose love and understanding of words somehow led him in to the world of battle rap, thus making him an internet sensation.

We met back in week 21 and did some non-#onesongaweek work together before Mark and Mixy (his partner in a spoken-word duo) agreed to ‘Sing for England’ on my Euro 2012 song.

6 months passed and I wrote a bunch of songs while Mark took a critically acclaimed show to the Edinburgh festival and went on tour with the Dead Poets.  Then eventually, in week 44, we got our act together…

During the first hour of Monday’s session we established that this wasn’t a normal collaboration (pop-songwriter meets poet/battle rapper) and as such we disregarded two lines of obvious enquiry (a song about love and a song about football) before stumbling upon an idea which could and probably should have gone horribly wrong… Politics.

The rest of Monday came and went.  We threw some (not very good) ideas around and resorted to playing a retro football game on the Playstation (ISS Pro – the original).  Long story short Mark’s well-groomed ability to navigate primitive and poorly pixelated games led to him registering my biggest loss (and no doubt his biggest win) of 2012 – 6 goals to 1.  Let’s move on, please.

Tuesday came around and we established that neither of us had (properly) dealt with politics in a piece for a long while… which made us both more determined to make it work but also highlighted that this was going to require some degree of thought.

Firstly, we didn’t want the song to be preachy or partisan.  Secondly, we wanted it to be reasonably factual in terms of it’s content and thirdly (perhaps most importantly) we both wanted to have fun with it.

Truth be told I soon twigged that this song was never going to make it onto an album in 2013 and for that reason I tried to let myself enjoy the process instead of getting bogged down in some of the things I usually worry about.  It took a few conversations with myself to make that happen, though – especially when it came to using the word ‘squark’ in a song…

Frank A: “I cannot put ‘squark’ in a chorus and sleep well this evening.  No, just no”.

Frank B: “Seriously! Put some chickens in the background if it makes you feel better?”

A twist on this weeks favourite lyric section.

This morning we realised we hadn’t given our ‘song’ a name yet and so we took some suggestions on Twitter.  Congratulations to @BostjanJerko who coined our favourite with his first idea (we liked the second idea too, but…)